Pheromones are signaling chemicals secreted by many types of living things including mammals, insects, and plants. When it comes to dieting and appetite control, there is not yet any evidence of an appetite-suppressing pheromone, but the opposite might be true.

Take as a given that women and men are affected by the pheromone produced by their mates. Work done by Martha McClintock at the University of Chicago has shown that women with irregular menstrual cycles will regularize their cycles if exposed to the pheromones in male sweat. This is also true if they spend the night with a man as infrequently as once a week.

Another recent study found that living with a member of the opposite sex brings about weight gain! The finding held in men and women. Many theories can be used to explain this finding and, similarly, so can pheromones.

We know that women with low body fat may have difficulty conceiving when trying to become pregnant. Perhaps the weight gain associated with co-habitation is nature's invisible use of pheromones to increase body weight and, thereby, increase the likelihood of conception.

If this is so, it's bad news on many levels. One would have to wonder what is happening to women who exercise in co-ed gyms. Do male sweat pheromones increase their appetites even as they labor on treadmills and stair-steppers to build muscle and burn calories? 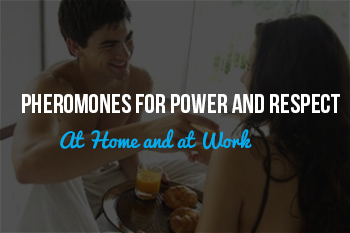 Is that mate of yours, who says you're gaining too much weight, actually the cause of the problem?

This is all just hypothetical, of course. But it suggests that things we blame on our weak characters, like over-eating and weight gain, might really be triggered by invisible cues in the air we breathe.

No one would advocate avoiding the opposite sex but, if this hypothesis is correct, you can take some steps to minimize the potential effects of pheromones on your appetite. First, increase your activity level. This doesn't mean becoming the next Lance Armstrong. Just move more. Ditch the remote and stand up to change TV channels. Leave the phone in another room so that when it rings, you must get up to answer it.

Finally, consider a delicious form of exercise, sexual activity. Game your own pheromones with some especially designed as sexual attractants. A sexual attractant pheromone improves your love life, and lets you burn those extra calories while you're at it.

To read about Pheromones for Power and Respect at Home and at Work .... click HERE.